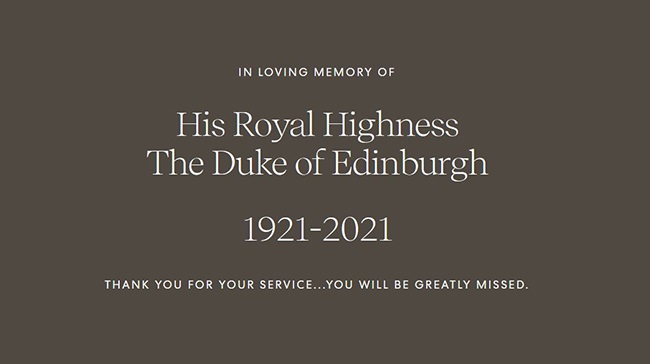 With the passing of His Royal Highness The Prince Philip, Duke of Edinburgh, Albertans are invited to offer their condolences to the Royal Family through an online book of condolence, which is available at alberta.ca/PrincePhilipMemorial.

Premier Jason Kenney issued the following statement to mark the passing of His Royal Highness, The Prince Philip, Duke of Edinburgh:

“I am saddened today to learn of the death of His Royal Highness, the Duke of Edinburgh. Albertans join others Canadians, and all members of the Commonwealth, in mourning his passing.

“Prince Philip was a great friend of Alberta, visiting our province many times since his first visit with Her Majesty Queen Elizabeth II, then Princess Elizabeth, in 1951.

“During these many visits, he met Albertans from diverse communities and walks of life, including students, artists, athletes, patients in hospital, veterans and members of First Nations, and was greeted by cheering crowds at events like the Calgary Stampede and the Commonwealth Games.

“His involvement with a great number of charitable organizations offered Albertans a shining example of public service. Since the 1960s, the Duke of Edinburgh’s International Awards have inspired more than 500,000 young Canadians, among them thousands of Albertans, to personal achievements in community service, physical recreation, skills development and outdoor exploration.

“His Royal Highness served with distinction in the Royal Navy during the Second World War, in both the European and Pacific Theatres. He was a member of the greatest generation, whose entire adult life was dedicated to public service.

“On behalf of the Government of Alberta, I extend heartfelt condolences to Her Majesty. The Duke of Edinburgh was a lifelong and steadfast partner in the discharge of her duties as sovereign. We also extend our deepest sympathies to all other members of Canada’s Royal Family.

“In sorrow and with enduring admiration, we extend to Her Majesty an expression of our abiding support and affection.”